Goodell and a well-behaved woman

NEW YORK CITY–Embattled NFL Commissioner Roger Goodell is taking steps to prove the league is serious about its stance regarding physical violence against women.  The first step was his recent announcement of a zero-tolerance policy in violent cases, and the latest step is the implementation of a training program that will teach all league employees the proper methods and techniques for providing discipline to belligerent females.

“While it is never okay to hit a woman, it is absolutely necessary to maintain the threat of violence,” Goodell advised, “Otherwise your woman will think it is perfectly acceptable to talk to you like you’re a child.”

Goodell confirmed that the training program will teach players, coaches and front office personnel how to respond to verbal confrontations with wives, girlfriends, mothers and even aunts and grandmothers, depending on who raised the player.  There will also be a focus on handling prostitutes and football groupies.

“We’ll be teaching tried and true disciplinary methods, such as the ‘Hold and Shake’,” Goodell explained, “But there will be added focus on completely non-contact techniques like the ‘Crazy Eye’, but as the NFL puts more effort into concussion prevention, that one gets harder and harder to pull off effectively.” 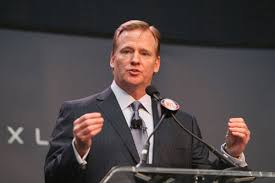 All current NFL employees will be required to take the class, and it will also be administered every year at the Rookie Symposium.

“Our ultimate goal is to easily coexist with the females in our lives,” Goodell said, “The best way to do that is to allow them the illusion of female empowerment while constantly reminding them of the enormous physical superiority of men.  It’s a very delicate balance.”