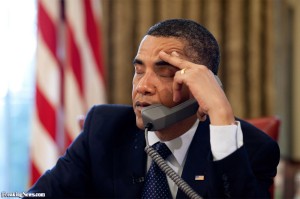 WASHINGTON, D.C.–Phone talks between President Barack Obama and Russian President Vladimir Putin broke down when the two leaders discovered that they were completely unable to understand one another.

Obama made the call to Putin in hopes of addressing the tensions between Russia and the Ukraine and the unstable Russian economy.  But the conversation quickly went south when Putin answered in Russian.

“I wasn’t exactly prepared for that,” Obama said, “Any time they show other world leaders in movies, they speak heavily accented English.  How was I supposed to know?”

A panicked Obama frantically called on staffers to find someone–anyone–who speaks a little Russian.  But the search came up empty.

“I thought I might as well just try to wing it,” Obama said, “See if I recognize any Russian words.  I know nyet means no.  And ruble is money-related.  (Putin) was talking away, but I didn’t hear nyet or ruble even once.”

Finally, Obama decided that there was no way any progress could be made and ended the call.

“We immediately put an ad in the newspaper for a Russian translator,” Obama said, “So, lesson learned, I guess.  The bad part is I actually had to hang up on President Putin.  I tried saying goodbye, but he wouldn’t stop talking, so I just hung up.  By trying to improve US/Russian relations, I may have made things even worse.”