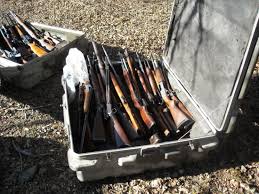 A look inside the president’s carry-on

JERUSALEM—Israeli Prime Minister Benjamin Netanyahu thanked US President Barack Obama for his first visit to the Jewish state in a national address that was covered extensively by world media outlets. However, at the end of the speech, which took place only hours after Obama departed for the US, Netanyahu seemed to suggest that the American president might be involved in the disappearance of thousands of guns that were reported missing during the visit.

“I’m just wondering if President Obama might have heard anything,” Netanyahu said, “I mean, they were right there before he got here and now they’re gone. Obviously, I would never accuse him of taking them, but you have to admit, it’s a pretty big coincidence.”

President Obama was en route to Washington aboard Air Force One at the time of the speech and wasn’t available for comment. White House Press Secretary Jay Carney suggested that perhaps the guns should have been in the hands of someone who was trained to use them, and not just out where anyone had access.

“Wow, I guess it just kind of proves that simply owning guns doesn’t necessarily mean you know how to use them,” Carney said, “It’s pretty bad when you can’t even protect your own guns.”

An anonymous source reported that Secretary of Homeland Security Janet Napolitano received a phone call from Air Force One shortly before Obama arrived, informing her that the president had a “big surprise” for her. A visibly excited Napolitano reportedly ran all the way to the White House to greet the president.

Following the speech, Netanyahu spoke to a group of reporters about the missing guns, continuing to imply that Obama might have knowledge about the theft.

“Obama’s secret service detail sure had a lot of guns, didn’t they?” Netanyahu said, “I know it’s sometimes hard to tell one gun from another, but they sure looked similar to the one’s we’re now missing. I guess it takes a lot of guns to protect you if all you do is go around being a dick to everybody. No, I’m just kidding. Obama’s a great guy.”

“I mean, before, I might have accused the Palestinians of something like this, but Obama said ‘put yourselves in their shoes’, which I obviously did, because the great Obama said it, and I realized that no one as fucking cool as the Palestinians would ever steal from us,” Netanyahu went on, “Man, I wonder who it could have been?”